Some of their stories

"Many suffer in silence due to the fear of any stigma 'mental issues' may cause on their suitability for jobs outside of the military."

Rachel C, a 13-year Navy veteran, served multiple combat tours as an Explosive Ordnance Disposal (EOD) technician, responsible for clearing hundreds of Improvised Explosive Devices (IEDs).  During her deployments, she was often shot at and had her convoy struck by roadside IEDs.  Many of her fellow EOD techs have died during these and similar operations. She understands what it is like to deal with PTSD first hand, but also as a spouse of a retired Navy SEAL. “PTSD is something my fellow EOD brothers and sisters joke about, ignore, compartmentalize, or drown out with alcohol.  When you see how many have paid the ultimate sacrifice, or have lost limbs, eyesight, or more, you start to feel guilty. Your issues seem trivial in comparison.  The last thing you want to do is acknowledge you have any post-deployment issues.  All you want to do is push through until the next deployment.  After the military, many suffer in silence due to the fear of any stigma ‘mental issues’ may cause on their suitability for jobs outside of the military.  I understand what it is like to deal with that difficult transition from active duty and losing your identity. When you are on active duty, especially during combat deployments, you feel like you have to keep it together to stay in the fight.  Then suddenly, the fight is not yours anymore.  It can be very difficult to adjust.  Too many of my friends have left the military, only to commit suicide." Rachel will be a member of the Project 2.0 Foundation's Race Across America cycling team in June 2020.

Pushing Through The Stigma 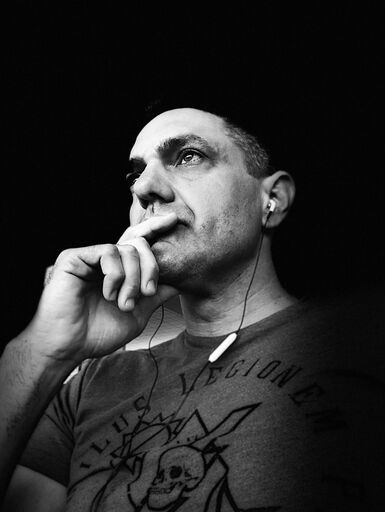 Michael Rios was born into the Army in 1972 at Womack Army hospital in Fort Bragg, N.C. to an abusive Vietnam vet father and a paraplegic mother (spinabifida). At six months old, his mother moved the family back to her home state of Michigan. Growing exceptionally poor, Mike spent a lot of time unsupervised as his mother worked 10 hours a day to put food on the table for he and his siblings. Becoming an Army Ranger seemed like a lifelong goal, almost obsession, for Mike. He recalls that his favorite book in elementary school was “D-Day: The Invasion of Normandy”. That goal was realized after graduating high school and joining the Army in 1991. Mike served in Operation Uphold Democracy in June 1994, and completed his service in 1995. After leaving the Army, he continued to serve his country and community by becoming a police officer in Dekalb County, GA. He then moved back home to Michigan and became a firefighter, serving the City of Walker for nine years. By 2002, Mike moved into a desk job and by 2009 found that he had become a shell of his former self. Work had taken the priority over physical health, and that Army Ranger that once looked back at him in the mirror had become lost in a different figure. It was then that he discovered a passion for triathlons after completing his first Ironman in Louisville in 2011. This year Mike will be competing in his sixth Full Ironman (eighth Full Triathlon) this year in Maryland.

“One thing that separates Rangers from other people is the ability to withstand pain discomfort for extended periods of time and not quit.

Rob Egan was born in 1972 and grew up in Lincoln, California. While in high school, Rob developed a knack for running and began competing in track and cross country. After high school, Rob attended the University of Redlands, where he continued competing in long distance running while studying computer science, physics, and mathematics. He earned his Bachelor of Science in Computer Science in 1996. After a few years working in the booming internet industry, Rob decided to put his career on hold to serve his country. Just weeks before the events of September 11, 2001, Rob enlisted in the US Army. Over the course of his six years as an Army Ranger, Rob completed four combat deployments to Afghanistan, and three combat deployments to Iraq. Additionally, he completed many schools ranging from sniper school to rally car driving school, and earned certifications such as EMT and Combat Life Saver. In late 2006, Rob’s enlistment ended and he returned to the career he had set aside. Soon after reentering civilian life, Rob got back into running and cycling. In 2014, he decided to try his first triathlon and immediately fell in love with the sport. Having competed in several sprint, Olympic, and half-ironman distance races, Rob completed his first full ironman distance race at Ironman Texas in 2018.

“I quickly realized after leaving the military that even those who appear to have returned from war unscathed carry their own scars, myself included.

Josh Mathis grew up in upstate New York with a passion for soccer, earning himself a scholarship to play in college. After the September 11th, 2001 attacks, his sense of duty overcame his love of the sport, giving up that valuable scholarship and joining the military in February 2002. Upon completing all necessary training, he joined the elite 1st Ranger Battalion, 75th Ranger Regiment. Within 30 days of reporting, he found himself in Afghanistan, followed by Saudi Arabia and then Iraq for the rescue of PFC Jessica Lynch on April 1st, 2003. After completing four deployments that also included time in both Saudi Arabia and Iraq, war had taken its toll both mentally and physically, leading to Josh's separation from the military in 2006 due to back and knee injuries.  The mental toll of his time overseas resulted in a diagnosis with PTSD in 2008. He attempted to work with the VA on recovery to no avail. Josh found that typical workouts didn’t seem to alleviate his PTSD symptoms. After being introduced to triathlons, focus and drive returned for Josh, and an increase in his quality of everyday life.

“Competing with fellow Rangers started to not only have the same brotherhood feeling of being in the military, but also had positive physical results unlike drinking and doing drugs."

Derek Dutton was born in Gillette, Wyoming and learned to swim before he could walk. After a family move to Montana, he was introduced to competitive swimming at the age of five achieving a few notable pool, state, and federation records, and a Montana state title. The events of 9/11 solidified his desire at the age of 17 to enter into the military and serve his country. After graduating Basic Training, Advanced Individual Training, Airborne School, and the Ranger Indoctrination Program (RIP), Derek joined Alpha Company (Aco) 3rd Ranger Battalion 75th Ranger Regiment (Aco 3/75). Not long after joining the 75th Ranger Regiment, in the spring of 2004, Derek experienced a parachute malfunction resulting in him plummeting to the earth below. As Derek puts it, “Luckily, my head and the runway broke most of my fall. Knowing that Rangers aren’t allotted luxuries such as excuses or injuries, I actually walked, or at least hobbled, away from this initial accident.” He soon deployed twice with his unit in 2004 and 2005. Although he walked away the parachute malfunction incident, the significant Traumatic Brain Injury that occurred was magnified and multiplied during those deployments. These lead to his retirement in December 2006. The separation from the military was not smooth, and brought on some dark years. Reprieve was found in endurance sports: Marathons, marathon swimming, trail running/ultra marathons, and triathlons.

“Endurance sports have helped me cope with my PTSD symptoms. It really has been my salvation."

Working Through The Pain